It’s Weird Now, But it Won’t Be Forever

Medium: Digital print on paper, mounted on wood panels and covered with acetate

Artist statement: The theme of our task was Differences Through the Eyes of Evolution, Devolution and Revolution. My mind travelled straight to gene technology, and genetic modification in particular. A key influence was Patricia Piccinini, an Australian artist who specialises in questioning the ethical boundaries science could cross. I found myself thinking about how definitions of ‘normal’ can change through time and place, making it a relative term – not something written in stone. I wondered how far ‘normal’ could be pushed … How would genetic modification be seen years in the future? Would it be seen in the same way as plastic surgery and tattoos? I settled on the idea of “It’s weird now, but it won’t be forever”. The best way I could think of showcasing this idea was through portraying the impact of new technologies, like advanced genetic modification for commercial use, through already existing and widespread technologies like social media. And so my piece took shape in the form of mock-ups of phone screenshots of snapchat and twitter feeds. I wanted my audience to view my ideas in a familiar way, as though they are on their social media feed right now, like this is already happening and it’s no big deal. Like it is normal. 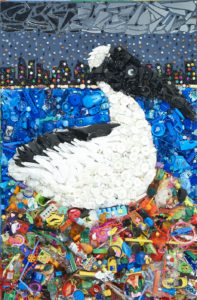