Artist statement: Italian culture has fascinated me since I began learning the language in primary school. Over the years, this has developed into a deep fondness for Italy’s rich history of art. Recently this was enhanced by a student exchange. I hosted an Italian girl, who is now a dear friend, and also stayed with her in Milan for two months. She opened my eyes to a new world, awakening a love for Classicism. My painting Embracedepicts this friend sitting on the lap of a marble statue of Venus. I photographed the statue when we visited an old palace in her home region in Italy, and superimposed an image of her onto it. I admire the work of Romantic artist John William Waterhouse, who painted women in long gowns inhabiting mystical scenes drawn from nature. I took particular inspiration from his work Psyche Opening the Golden Box. As our theme was Old: Preservation of the Past, I decided to represent my friend who believes in allowing the past to exist alongside the present, rather than being left behind. She is cradling the face of the statue, holding on tightly lest it became buried amongst the foliage. My message is for all of us to treasure the past in our journey towards the future. 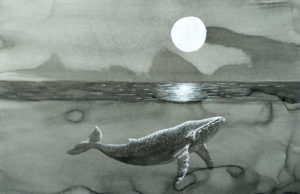